OSTEOPATHY AND NLP LIFE COACHING TO HELP YOU, YOUR BABIES AND CHILDREN -HELPING PEOPLE OF ALL AGES IN ASHFORD KENT. 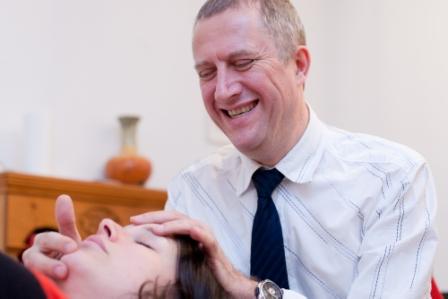 Can Cranial Osteopathy Help You?

Why is it different from classical osteopathic manipulation?

Cranial Osteopathy is a very gentle and relaxing treatment aspect of osteopathy which can be applied to the whole body not just the head. It is a very effective approach and is successfully used for conditions of all age groups - babies, children, adults and the elderly.

Osteopathic techniques vary from extremely gentle, to osteopathic thrust techniques (famed for producing 'the click'). Cranial osteopathy lies at the extremely gentle end of the scale. It is quite common for patients to feel so calm and relaxed that they fall asleep during a treatment session. Because of the very subtle nature of this approach, it enables the practitioner to gain information about your physiology which would be very difficult by other means. This enables a more profound understanding / diagnosis of your condition to be made, and giving you greater holistic benefit from the treatment. 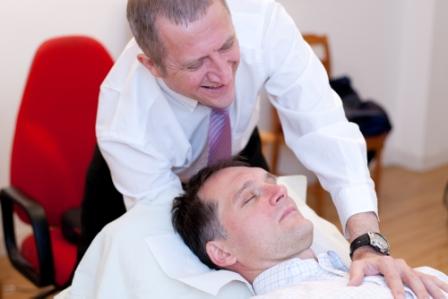 What does a 'cranial osteopath' do when putting their hands on your body?

Because cranial osteopathy is so gentle and relaxing, sometimes it may seem that nothing is happening. The reality is that quite the opposite is occurring. The Cranial Osteopath when putting their hands on your body is evaluating subtle strains and tensions which have been building up in your body since childhood, and even some tensions since your birth! These old 'underlying tensions' are the background to your developing your current complaint. They can arise from posture, old injuries or accidents, falls, motor accidents etc. etc. Even if you have recently had an injury e.g. a car accident, the background tensions in your body will have made the consequences of the more recent injury much greater, causing greater discomfort. Obviously the recent situation is also evaluated and put into perspective with the older strains and tensions. Many conditions arise without any significant event happening.

- This is a common onset of pain. The person had picked up his newspaper literally thousands of times in his life so what was the real reason his 'back went' this time. It is often the underlying strain and stress which reveal the true cause of the problem,

Let's illustrate this by an example:

John as a 7 year old had a bad fall off his bike landing on his side. He had a bit of bruising and pain for a day or so but this soon went away. When in his early 20's he had a car accident with whiplash which caused neck pain and headache for 10- 14 days, then eased. This causes added strains to his lower back compounding the effect of his bike fall. Age 35 he progresses in his career he is subject to much stress and tension. This causes tension in his mucsles and joints especially in the upper neck area. John then decided to come for osteopathic treatment complaining of spinal pain. What is the cause? He has a combination of strains and tensions since childhood, all of which may be contributing to his current symptoms as a 35 year old.

Why is it called "Cranial Osteopathy" if the approach is used for all aspects of the body?

Because the osteopath who developed this approach, William Sutherland (an osteopath in the USA who died in 1952) discovered a subtle motion or rhythm to the body from studying in great detail the bones of the skull, this osteopathic approach has become known as Cranial Osteopathy. Sadly this misnomer has led to misconceptions over the years, but it is very much a holistic total body approach to treatment.

In the same way that disturbances in the function of the spine can affect the arm and legs, so strains and tensions in the head can have a profound effect both in the head and the whole body. Specialised joints called sutures link the bones of the head. William Sutherland noted that, like all other joints in the body, movement occurs at these specialised joints. However, he noted that they move in a much more gentle and subtle manner. Because motions of the bones in the head are very delicate, Sutherland devised very effective, subtle and gentle techniques to release strains and tensions in the head and found these methods highly beneficial throughout the whole body.

Call for how you or you child can benefit

Osteopathy for All Ages

Osteopathic treatment of babies can help this age group too. Phone Tim Marris for more information. Osteopathy can help all age groups including babies and children. Tim Marris is a co- author of 'A Textbook of Paediatric Osteopathy'

Cranial osteopathy is now well known for its effectiveness and gentleness. It has gained an excellent reputation for its benefit with babies and children (click to see our Babies/Children page) in addition to its benefit on a wide range of conditions in adults.

If you would like to know more about this highly beneficial osteopathic approach, do phone (see number at foot of this page) and feel free to discuss your situation in full confidence.